Bob’s blog: An old fashioned Aperitif with a long history

Sherry was the standard aperitif when I was a lad and when working in the UK years ago, it was always offered to the woman while the real men drank Scotch! 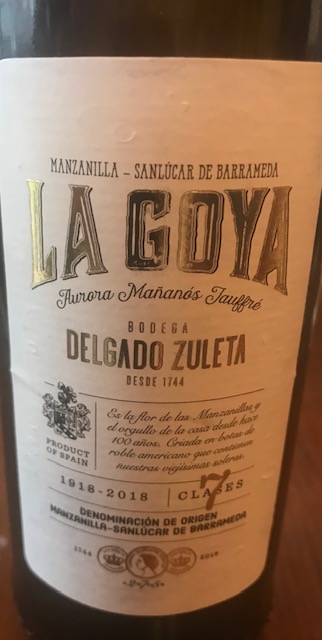 We have moved on from that time and yet there are some interesting connections associated with wine of the past. I will come to the important Hunter connection to this ancient wine-producing region and its more modern aperitif style wine later.

Possibly, our longing for nostalgia led to a recent meal that featured a world-famous Sherry’. That is to say the marvellous Delgado Zuleta “La Goya” Manzanilla Fino Sherry. This we enjoyed at the Legends Lunch at the Woods restaurant a few weeks ago.

It was obtained by Richard Friend and our leader Ian Napier and came in half bottles. Richard explained it is most important it be consumed relatively fresh – within a year of bottling and a day or two after opening. The half bottles help ensure no wine is left in the bottle!

After eight years in the barrel, it is bottled before the flor yeast dies off avoiding any marked oxidative or Amontillado characters can form. Made from white Palomino grapes grown near Sanlucar, a relatively cool, humid seaside area, it takes on a tang of the sea with a suggestion of chamomile flower or very slightly apple character (Manzanilla being Spanish for Camomile or apple). It has an oyster or abalone scent with a hint of chalky lime reflecting the soil in which it is grown. ( NB goes well with Caviar and oysters)

As the Palomino grape is fairly bland in flavor, the process of wine-making, the site of the wine house – the bodega, the length of time in barrel, the addition of neutral grape spirit, the maintenance of a flor throughout the process all impact on the style of wine produced.

To me of interest is the impact of the sighting of the bodega as an important factor in the production of sherry. The long time in barrel with about 20% air space or ullage above the wine allows a subtle influence of the air surrounding the bodega to occur. The flor, of course, grows on top of the wine and protects it from oxidation but depending on the style this does not always remain intact. Some sherries are fortified with natural grape spirit strong enough to kill the yeast and encourage oxidation and a greater influence from the atmosphere.

We can define sherry basically as a blended and fortified wine, made from grapes and in the bodegas of the district centred on Jerez-de-la-Frontera, found in the province of Andalusia, southwest Spain not far from the harbour of Cadiz.

The name Jerez-Xerez-Scheris (Spanish-French-Moorish) has been anglicized into the English Sherry. The region has been growing grapes and making wine from Roman times.

The Roman writer Columella, from Cadiz, wrote in the first century about boiling down the grape must into sapa and defrutum to add to wine to sweeten it. This technique has been used throughout the centuries and is still used today in the making of some Sherries. This technique continued during the dark ages with the Vandal or Hunish domination, not being lost as in other parts of Europe.

Even during the occupation by the Moores, the grapes were still grown for their fruit and the must boiled to provide sweetness well before sugar became available. In addition, the Moores conveyed their knowledge of distillation. Used not for alcohol concentration but for making perfume from distilling the sap and essence of flowers.

In 1264 Alfonso X liberated Jerez from the Moores and it became the frontier of Christendom -Jerez-de-la-Frontera. Now with the know-how of both winemaking and distillation, it wasn’t long before the ancient Roman tradition of fortifying wine to enable ageing and transport was rediscovered.

In 1492 not only did Columbus sail the ocean blue but Granada fell to Ferdinand and Isabella and the Moores finally departed Spain. This freed up Jerez from military duties and led to the expansion of the wine trade. In particular, with Catherine of Aragon marrying Henry VIII of England special privileges were given to English merchants who came to Jerez and Seville to buy wines for import.

From the special Privileges granted in 1517, it is possible to trace the origin of the wine called Sack from Jerez, “these were natural wines, not exceptionally dry, but very much drier than the sweet or sweetened which had hitherto been imported from Spain”, the name possibly derived from the Spanish ‘seco’(dry). However, Sack became a more generic name for a variety of wines often sweetened and highly fortified for the English market. 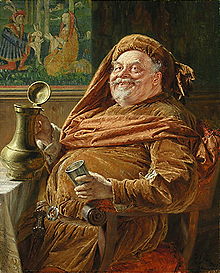 At one stage it was thought the name Sack derived from the sacking of Cadiz in 1596 which followed the attack by Sir Francis Drake in 1587 that delayed the Armada. Drake certainly took a large amount of wine back with him and helped popularize it among the English people. Indeed Shakespeare by 1597 had Falstaff drinking “a good sherris-sack” which “ascends me into the brain…and warms the blood”. Interesting that he qualified the sack with the term sherris as by then many sweet, fortified wines from Spain and the Canary Island, including Rumneys, were called sack.

Following the Napoleonic wars, the Spanish wine trade recovered and was exporting the same style of sweetened fortified wines unimpeded by the “flower”, as determined by the merchants, and as it had done for centuries. The locals preferred interestingly the light dry wines that developed under the flor.

In 1831, as the history of the Gonzalez-Byass records, James Busby visited ‘Xerez’ and approved of the local “vin du pays -Manzanilla, a wine preferred to all other wine by people of all ranks”. He described it as “ a light pleasant beverage, having at the same time a mellowness and flavor”. He did not doubt that “after a little habit” it would appeal to the English taste.

The gem of an idea took hold and by 1858 the first Finos and Manzanillas were exported from Spain to England and the Sherry trade bloomed. Enjoyed as an aperitif it opened a new era of blending and the recognition of the importance place and matching the style of these lighter wines to an appropriate degree of fortification.

There is so much more to the story of Sherry-for instance Bristol Cream a well known and popular style is said to have been fined with milk before blending giving it a creamy palate. More possibly for another day but the Manzanilla “La Goya” which started our lunch certainly sparked a lot of interest.

I have used the following in preparing this blog

Journal of a Tour; James Busby Stephens and Stokes, Sydney 1833

By law, we may only supply alcohol to persons aged 18 years or over. We will retain your date of birth for our records.