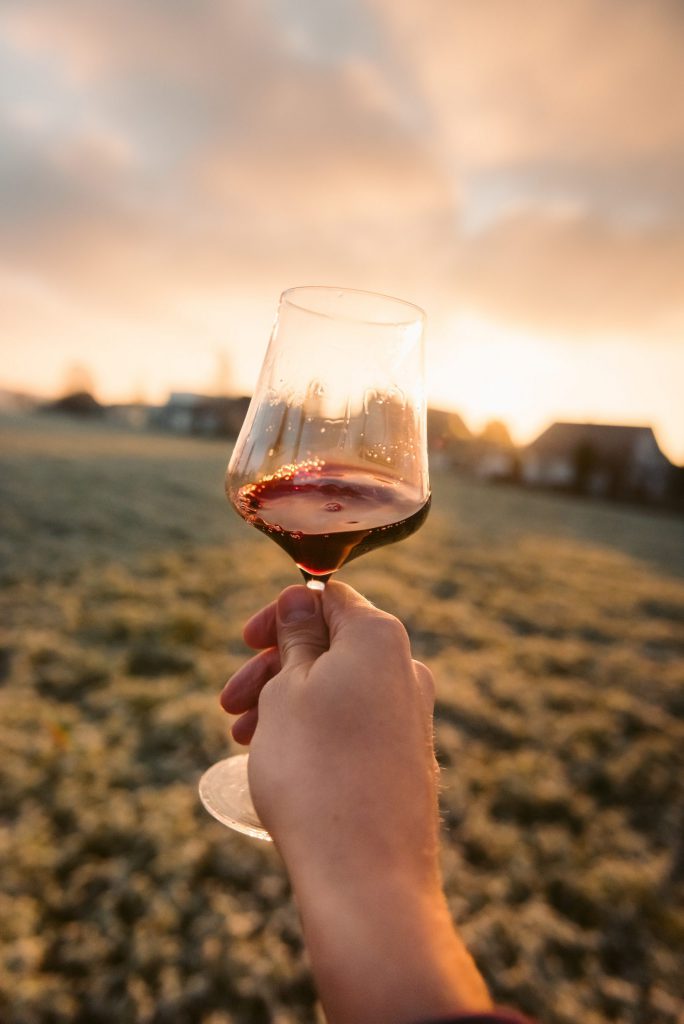 Not enjoying the humidity that comes with a Hunter Summer? Well, you may not know it, but the vines are – not so much the risk of mildew infection, which we spray to avoid, but the protection the humidity gives them stopping them from drying out and shriveling.

One key reason the enhanced flavours from summer rainfall challenged wine growing regions, such as here and in Bordeaux and Tuscany, is the humidity which protects the grapes from drying out, allowing a good water balance and enhanced metabolic activity. With grape shrivel the porosity of the skins increases and flavor compounds evaporate as many have a lower molecular weight than water. Adequate groundwater we can supply with irrigation, but it’s the humidity that prevents the shrivel and enhances the ripening.
Some years ago, I visited Jim Watts, a surgical colleague and owner of Fox Creek vineyard in Maclaren Vale. He took me out to the vineyard where the Shiraz grapes appeared in a shocking state, shriveled like raisins. I asked what happened and he said they weren’t yet ready to pick! Of course, it takes longer for these grapes to ripen given the poor metabolic stare of the individual grapes. We often refer to “Maclaren vale jam” – the concentrated juice which is the result.
Importantly, today there has been a shift worldwide from big, alcoholic, over the top reds to more medium bodied wines and it is in part the Terroir that provides the grapes for such wines. Wine style is to a large extent determined in the vineyard and so it is that Hunter wines fit nicely into the medium body wine so much in demand now.
After almost 200 years of successful winegrape growing in the Hunter our natural climatic, soil and human experience has helped to define a distinctive region and style recognized worldwide.

The dominant factor that helps create this unique region is the break in the Great Dividing Range that allows the moderation of temperatures, particularly the cooler sea breezes being sucked up the valley at night, and the moisture from the nearby ocean creating the summer humidity. A lack of understanding of the actual local weather conditions has led some wine writers to dismiss the Hunter based on temperature readings. In reality, two centuries of production quickly dismiss any such argument!
A lot is said of the soils that make up the Terroir and, like many leading winegrape growing areas, it is quite variable in the Hunter. We recognize in the Pokolbin Broke-Fordwich subregions some vineyard blocks that are exceptional, and many try to relate this to the underlying soil. Of course, aspect, height, gradient, contour, the orientation of the rows of vines – those aspects that allow sunlight in and also human endeavour to improve the soil composition as well as irrigation and drainage all play a part.

Some time ago I was reading Hugh Johnson’s book The Story of Wine and he mentioned how over time the better blocks get to be known, particularly in Burgundy. The influence of human endeavour is highlighted by the need for renewal of the soils. Even that most famous of vineyards Romanée-Conti in 1749 was “refreshed” with hundreds of wagon transporting loads of chopped up turf from the hills behind, the Arrieres-Côtes.
Indeed, some years ago, I saw in Chablis whole vineyard topsoil of mainly calcific stones being pushed aside by bulldozers and clay soil being spread before the stones were placed back over as topsoil.

In that most famous of wine regions Bordeaux, the marshy Médoc was masterfully drained by Dutch engineers in the 1650s and Chateaux Lafite, Margaux and Latour were planted around 1690 on the reclaimed soils.
These insights led me to take a slightly more cautious view than those who place so much importance on the soil to the exclusion of so many other factors. The argument is that it must be the soil as vineyards experiencing the same weather have different quality wines. But how the vineyards respond is also important.
So, within a region, it is true that other factors play a part. Soil drainage, for instance, maybe better on those blocks with clay and limestone conglomerates as their base or those with a slope that allows excess water to run off.
Clearly soils need managing, compost is spread to balance the clay, seaweed and calcium are added to the soils, an intervine crop or sward can enhance the soil and of course in most vine regions of today drip irrigation is key to a balanced crop.
Like in Burgundy, we have in the Hunter a patchwork of vineyard blocks often planted to run with the contours of the land to prevent erosion for instance. We have some wonderful Semillon blocks on creek bed soils around the Rothbury and Jump up creeks that consistently produce outstanding wines but also some predominate clay soils such as Bob McLeish’s vineyard produce award-winning Semillon’s.
At Tintilla Estate, making wines for some of the smaller vineyards illustrates to us the variability in ripening influenced by aspect and row orientation and vineyard management. However, it is all within a narrow period of a week or two. The region, as a whole, is often fully picked before the mid to late February rains and very hot weather.
Another aspect of the Hunter Terroir is our relatively dry spring compared to the more Mediterranean climate of say South Australia. These days we can start to fill the water table with irrigation in late winter, but it is limited. Fortunately, it is recognized that a slight deficit in water between flowering and veraison will keep fruit small and accelerate its maturation, another factor allowing our fruit to be picked in a timely manner in late January-early February before the heat and rains set in. unfortunately both water stress and water excess can delay maturation so timing is everything.
Brown stalk of maturing grape bunch
Brown stalk of maturing grape bunch
Prior to veraison, there is a strong correlation between soil moisture and berry size due to the free flow of juices in the vines. Post-veraison the efficiency of Xylem flow falls away and there is no direct link between moisture levels and final berry size. The Stems of the bunches become woody reflecting the altered flow characters.
As we swelter in this unusually hot summer it is interesting to see how the grapes are coming in looking clean and healthy. The long history of viticulture in the Hunter has prepared us for whatever the weather has to throw at us. The private irrigation pipeline has enhanced our ability to moderate the growing environment. In wet years we duck and weave between showers and are well versed in spray programmes to inhibit the mildews.
The unique situation of the Hunter winegrape growing region being situated in the break in the Great Dividing Range creates the climate that moderates an otherwise warm grape growing environment. The years of experience and knowledge add to the development of high-quality wines from the patchwork of soils and vineyards all of which go to define the Hunter Terroir.
Today more than 2.5 million visitors come to the Hunter to enjoy the views both natural and manmade. Through wine-tourism, they get a sense of place and history, relax and sample the local products. Not only is it one of the three “Urban Green Lungs” of Sydney it attracts National and International visitors. Just like Burgundy, Bordeaux, Tuscany, and the Napa Valley, the unique Hunter Terroir creates interest, memories, connects people, product and results in some $500 million annual output and 2800 jobs.